What ARE cryptic crosswords (apart from utterly infuriating?!)

A cryptic crossword is a British invention, and as such tends to be more wide-spread and popular in the UK and Commonwealth countries (Australia, Canada, New Zealand, South Africa, India etc). There are a few American outlets for cryptics, but only a few.

A cryptic is set in a normal crossword grid, which looks something like this ← 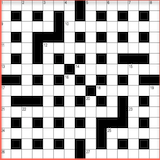 Now, a normal 'quick' crossword has definition clues. So you might find a clue that reads:

That's easy enough. They can still be hard, especially if the answers are rare words, and the definitions may sometimes be rather oblique, or examples of something, but you're generally just looking for a synonym to get the answer.

In a cryptic clue, however, there are two ways of getting to the answer. Each clue is a little mini puzzle, with a variety of sorts of standard wordplay devices used. The wordplay is also called the subsidiary indication, or sometimes just the subsidiary, but I prefer wordplay, cos that says what it is more clearly.

So, the basic anatomy of a cryptic clue is:

Using the example above, a cryptic clue for the same answer could be something like:

In this particular clue, betrayal is the definition, as in the 'straight' clue above. The wordplay section is unstable senator, and from is a linking word, joining the two halves of the clue (these are sometimes present in a clue, but not always).

So, what about this unstable senator malarkey? Who is this perfidious senator, and why is he unstable?!

Well, unstable is what's known as an anagram indicator — this is a word in the clue that tells you that an anagram is present, and you need to jumble up some of the letters in the word. And yes, you guessed it, senator is the word to jumble up (also known as the anagram fodder). And sure enough, when you jumble up the letters of SENATOR, you get TREASON!

Indicator words play an important part in many (but not all) cryptic clues. They are pointers to you as to what to actually do with the other words in the clue, and how to get to the answer. So there are anagram indicators, and hidden word indicators, and charade indicators, and ... you get the idea!

There are about eight or so types of common cryptic devices. In this series I'll explain each one with examples, so you can really get the hang of them.

One thing it's important to do with cryptic clues is to ignore the surface reading. The surface is the sense you get when reading a clue for the first time, the mental image it brings up. Apart from some very rare clue types, this is only going to lead you astray. What's important to do is to read each clue, word by word, looking for the hidden meaning.

Also, there are a few important things to note with the definition part of clues.

Firstly—they will always be at the start or the end of the clue, but never in the middle (with bits of wordplay around them).

Secondly—pinning down the definition is a major part of getting success in solving cryptic clues. And of course, once you've figured out which part is the definition, the remainder of the clue has to be the wordplay!